Select a department to call.

On June 10, Jose “Angelo” Reyes went to work like any other day. While Angelo was going about his duties, his boss stopped him and asked if he felt okay. Considering the motive behind question, Angelo inquired. His boss said his eyes were yellow. A playful guy, Angelo blamed it on the lighting fixtures being old.

A few days later, Angelo’s skin also turned yellow. He was fatigued, but kept going into work and attending to his responsibilities. His symptoms persisted: his urine became a dark brown, he gained weight. Eventually, Angelo’s family convinced him to go see a doctor.

After a visit to a GI physician, Angelo learned that he in fact had not been gaining weight but his abdomen had been filling up with fluid, or ascites. This was likely caused by cirrhosis, a liver disease typically brought on by lifestyle choices such heavy alcohol intake or drug use. But Angelo did neither of these. The third most common cause of ascites is stress, the most likely source of Angelo’s condition.

On June 29, Angelo went to MountainView Hospital in Las Vegas, Nevada, a fellow affiliate of HCA Healthcare and sister facility of Riverside Community Hospital. The following day, after being evaluated by a team of clinicians, Ghulam Mujtaba, MD, Gastroenterology provider at MountainView, informed Angelo he had liver failure and a MELD score of 27.

The MELD score is used to evaluate how severe a patient’s liver disease is and their eligibility for liver transplant. The score ranges from 6 - 40 and is determined from a number of lab tests. The higher the score, the more likely the patient will pass away without liver transplant intervention. A MELD score of 35 is the critical point and patients are #1 on the liver donor list.

Dr. Mujtaba was hesitant to drain the fluid from Angelo’s abdomen – since he was so prone to bleeding – a single wrong puncture could be life-threatening; and the rapid rate Angelo’s MELD score was progressing, there was a good chance he would need to be ventilated and in intensive care. Dr. Mujtaba’s diagnosis suggested Angelo would need a liver transplant.

On July 5, Angelo and his family celebrated his wife’s birthday in the hospital while MountainView was adamantly working on finding a location to transfer him to that could provide the transplant service he needed. During this day, which should have been joyous, Angelo’s MELD score reached 34. Dr. Mujtaba informed the family that without a new liver Angelo would have approximately 30 days to live.

Angelo was transferred to Riverside Community Hospital (RCH) and arrived on July 9 around 1:00am. His brother drove alongside the ambulance during the 5-hour ride down the 15 Freeway to Riverside. The anticipation, bumps in the road and rocking of the vehicle made the journey feel even longer to Angelo and his wife inside ambulance. Upon arrival to Riverside Community Hospital’s ER, Angelo recalled a warm welcome, introductions and several nurses and doctors saying, “We are going to take care of you.” Later that morning, Angelo was evaluated by our expert transplant team.

“There was no time to wait,” said Alagappan Annamalai MD, Transplant Oncology Surgeon at Riverside Community Hospital. “Angelo was in serious liver failure and he needed us to be there for him quickly and efficiently. His life was as risk more and more each day.” By Sunday, July 10, Angelo Reyes was listed in UNOS (United Network for Organ Sharing) and placed on the liver transplant waiting list.

“I was really astonished,” said Brendan Boland MD, Transplant Surgeon at Riverside Community Hospital. “Given Angelo’s MELD score and liver failure, patients in a similar situation would have been in the intensive care unit, on breathing tubes, unable to eat, let alone be conscious. And here, Angelo was talking with his family, making jokes, praying and engaging with his care team. It shows a positive attitude and faith can really impact your health.”

Two livers became available during Angelo’s stay at RCH and neither one was a match. Early in the hours of the 15th, another liver became available. Dr. Annamalai rush-ordered blood work – a nurse ran it to the laboratory after being drawn. It was a match. Angelo would get this liver.

Angelo underwent his liver transplant on July 16. It took 6 hours, instead of the expected 12.

When Angelo woke up from his transplant, still incredibly drowsy from anesthesia, he asked for a pen and paper. He wrote a note and included everyone’s name on it he had met prior to surgery. “You all saved my life,” it read.

One week following his transplant, Angelo was eating, healing well and full of energy. He asked for Jackie Van Blaricum to visit him. In an emotional meet and greet, Angelo tightly held Jackie’s hands as he tearfully thanked her for getting him to Riverside Community Hospital and shared his arduous story of liver failure.

A few days following, Angelo was downgraded from the Surgical Intensive Care Unit (SICU) to the Transplant Oncology floor where he reunited with Nichole Grannan, RN who took care of him on his first day at RCH. “Seeing him before and after the transplant, his condition radically improved and his spirit just warmed my heart,” said Nicole.

“Mr. Reyes is a trooper,” said Sameh Fayek MD, Transplant Surgeon at Riverside Community Hospital. “Despite his degree of illness, he has been always full of positive energy and faith that I believe expedited his recovery. He was engaged in his care and followed physician directions consistently. Mr. Reyes enjoys a wonderful family that loves him and it has been a pleasure to take care of him.”

When asked, why he didn’t go to the hospital when his symptoms kept getting worse, Angelo said, “I’ve never needed the help in my family; I’ve always been the one helping them. To me, I had to keep charging through to work, provide and care for them. My family is everything to me.”

The day Angelo was discharged, he wanted to go see the nurses in SICU where he had been prior to and post-transplant surgery. While several nurses he recalled were night shift and not on site, and others were off that day, one was able to come up to his room before he left. “We never get to see this – how much healthier and stronger the patients are after they leave SICU,” said Meghan Meyer, Surgical Intensive Care Nurse at Riverside Community Hospital. “Seeing Angelo thriving before he left the hospital filled me with immense joy of this man’s second chance at life.” 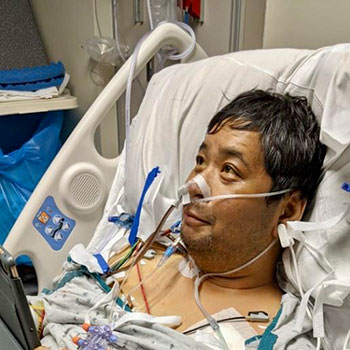 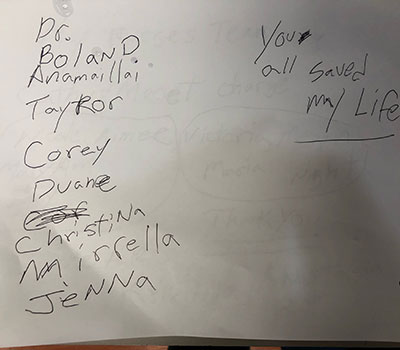 The note Jose Angelo Reyes wrote waking up after surgery. 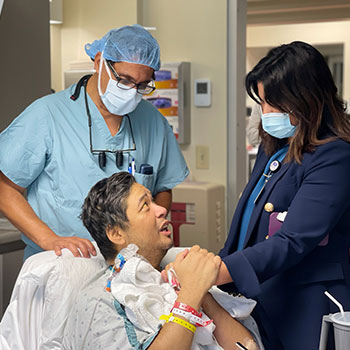 Jose Angelo Reyes thanks Jackie Van Blaricum, CEO Riverside Community Hospital, for helping him get to Riverside, CA from Las Vegas, NV for his liver transplant. 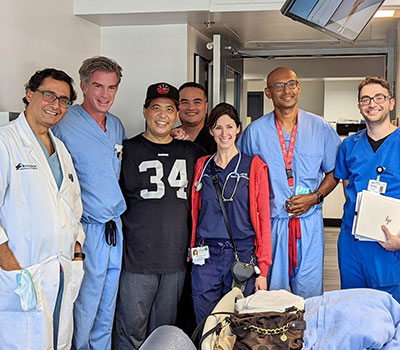 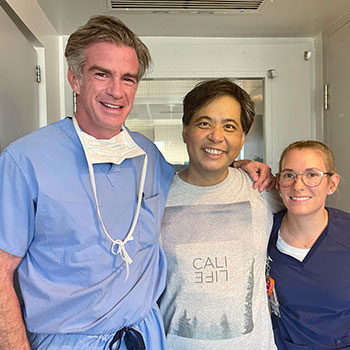